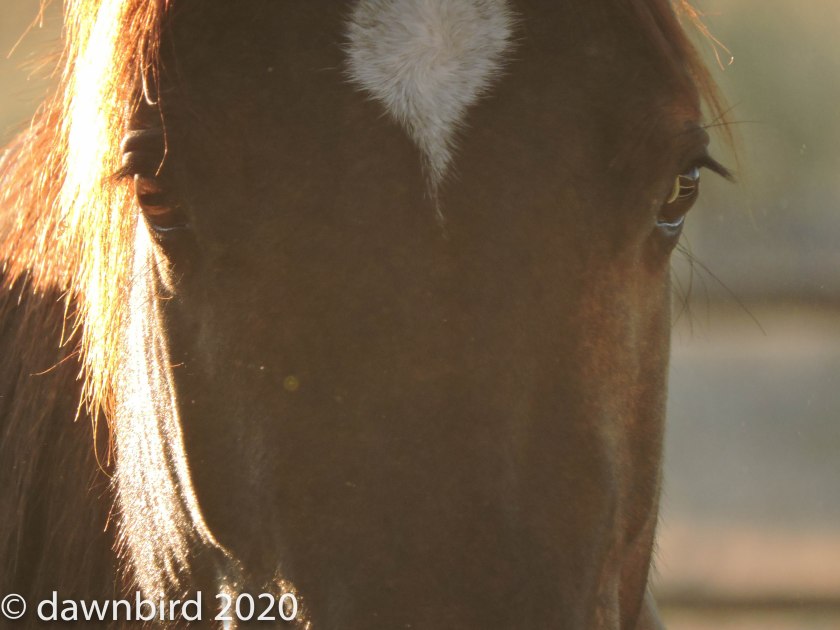 I love this quote by Thomas Fuller – “Absence sharpens love, presence strengthens it”

A few years ago I went up north and spent a week at a cattle station in the Kimberley region of Western Australia.  I was tired of hotel rooms.  I wanted to go back to basics and rough it.  I was immediately drawn to the horses.  The first time our eyes met, I was mesmerised by the intelligence, sensitivity and awareness of these animals.  They had this undefinable presence and I was hooked.  I took scores of photographs but this one is a favourite.  In these beautiful brown eyes I connected with something deeper within me.  It was easy to go there. I was no longer alone.

Everything I saw and experienced was a healing moment in my journey.  The 4WD river crossings and climbing rocks, where I had to place my trust in strangers, saltwater crocodiles we saw that scared and delighted me, camping under the stars one night, the sounds of brolgas in the dark, the barramundi fishing, the open camp fire with billy tea for breakfast.  What an adventure!  And as the full moon shone bright, alone in my tent, something shifted in me.  The urge was irrepressible.  For the first time in 17 years I started to write and shared my work with others.  ‘My voice’ had returned.  I had returned.

Until then I felt I was alive but did not breathe.  Grief has its own subjective expression.  Although I was highly functional and successful in every other way, the core of me, my writing, ceased to exist.  Among strangers I found family.  No longer did I have to be brave and dry eyed.  It somehow felt okay to weep in words and, at last, grieve my profound loss.  It felt like those around me understood the unspoken.  They were respectful and sensitive in moments of silence when I fought for composure and at times, strangers cried with me.  My pain, theirs.

I’ve shared this poem elsewhere in my blog but tonight I feel like I want to share it again.  I wrote the poem as a tribute to those who were at the Station with me.  If I am at peace and accepting tonight, it is because of them.

Stars
As the moon brightened the night,
I walked along the celestial bitumen
I saw stars there, signposts for travellers lost
I saw stars in other places too, that only I could see
Have I been lost?
Did you leave them there for me?
As dawn unveiled the granite ridge
I saw a kapok tree, aglow,
with yellow flowers on bare, brown branches
And at my door, emu and wallaby
Child-like I spied on nature
clutching seedpods in my hand
held my breath watching blue dragonflies land
And, while passing travellers warned,
I experienced life at a billabong
I walked down a dusty path, visible to you, not me
to Mother Boab tree
and at my feet I found stars twinkling
where light and shadow meet
I have been on a silent journey
This time, the million steps became one
when I headed out in someone else’s footsteps
and returned in mine
My fellow travellers, you were not to know
long ago, yet, like yesterday
Grief silenced me
But in the barren night, alone,
not alone
I found something glowed in the Kimberley
It was the stars

The ones you left for me.

In response to Word of the Day Challenge – Sensitive