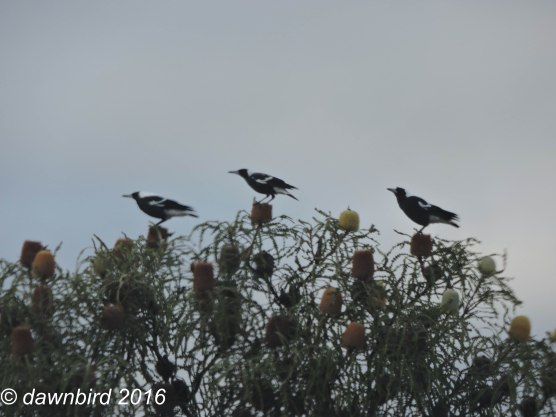 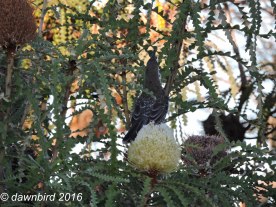 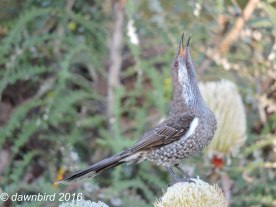 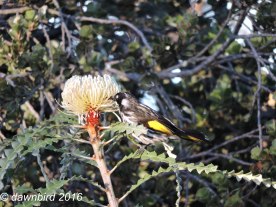 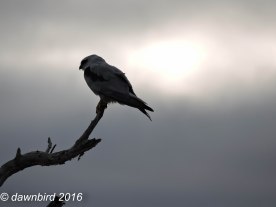 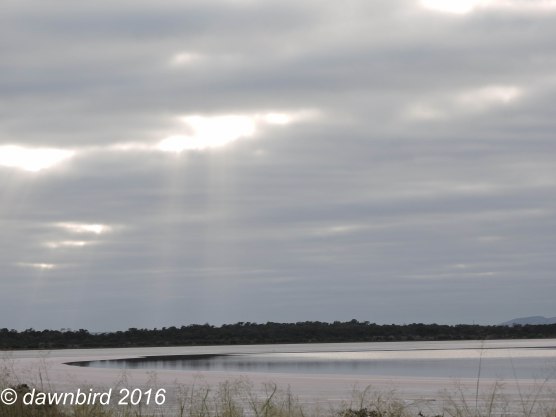 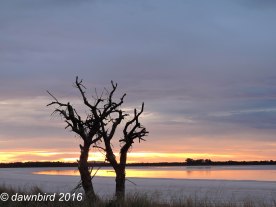 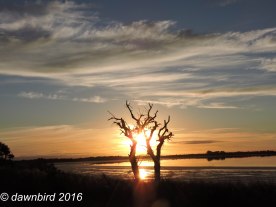 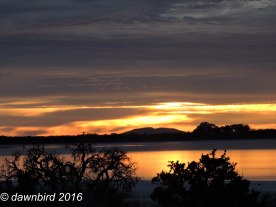 I hear the first birdsong at 5.29, half an hour after I wake.  I dress in the dark only to find a chill in the air outdoors and no warmth in my suitcase.  Autumn has arrived in Esperance, unlike Perth, where it is sweltering.  Undeterred, I drive off under a sullen sky to Lake Warden.  Pink Lake is pink no more but Lake Warden is slowly changing hue instead.  Depending on who you ask, it is either due to a specific algae or it is a bacterium.  The depth of colour is unpredictable, sometimes more vivid from the air, but muddy at ground level.  Expecting the unexpected is a gamble I take whenever I visit.

At Lake Warden I seek out the banksia grove and scrub land knowing they are teeming with native birds.  But, finding a spectacular daybreak is an unexpected find.

Nowhere to be seen, I can hear tiny birds but they are maddeningly elusive.  So I aim my camera at the three magpies atop a banksia tree, singing.  The Three Tenors of the trees.  The red wattlebirds sing out loud, giving it everything they’ve got, their bodies tensed into an arched bow.  The beautiful black, white and yellow New Holland honeyeaters erupt vertically from the tops of the trees, like fireworks.  There are other birdsongs too.  I will take my time getting to know them over the next few visits.

As I drive down the road I catch a glimpse of something moving alongside my car.  It is a kestrel, engaged in a slow dance with a sudden gust of wind.  It bobs down slowly, soars vertically, flaps his wings for a few seconds while stationary, and then descends, floating alongside me.  I follow it to a tree, long dead but still there, like a memory.  My camera lens finds the lake shimmering under a spotlight where the sun has pierced soft spots.  Through the sieved clouds I see spills of sunlight in pink, lavender, silver, blue and white on a mirror lake.  I sit there quietly, mesmerized, a captive of the kestrel, the sunrise and the Lake.

My alarm goes off.  The kestrel hears it too.  It’s time to leave.  Reluctantly, I do too.   But not before a final picture of the sun rising high above the Lake, setting aglow everything in its path.

This was a magic carpet ride at dawn at Lake Warden, in the south east of Western Australia.

Hope there was enough space for you to climb aboard too.