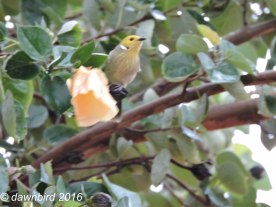 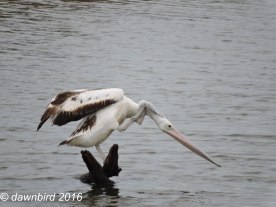 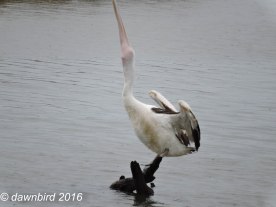 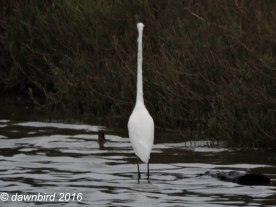 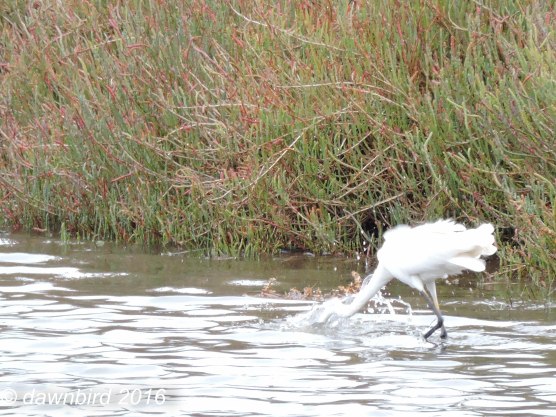 I was disappointed to leave Perth in a bigger plane.  We flew higher and faster.  I missed seeing the sun set over the ocean.  I arrived in Geraldton just after.  The mottled sky promised rain.

Next day I woke to thunder rolling in an arc above me.  Vibrations travel the length of my spine.  A flash of blinding light is the pinprick to the cloud balloon.  At predawn I stay in bed listening to Nature’s rhythm and fine tune mine for the day.

The ‘city’ precinct is edged by the sea, and today it is grey as the sky above it.  Warm, light rain beats down steadily.  After an hour of report writing, I’m restless and yearn to be outdoors.  The only protected area is the small covered strip outside the hotel room. I hear the first birdsong at 6:19 am.  The magpie lark calls with an insistence so I follow it outside.  Synthetic lawn (an abhorrence!) cushions my footsteps.  The yellow-faced honeyeater, similar to what I saw in Karratha, stops long enough to confirm it is exquisite but swift in flight.  My pics are blurry, but you get the idea.

When my day ends I take a short break at Bluff Point where the Chapman River meets Champion Bay.  A pelican lands on a tree stump with the grace and precision of an airliner.  It grooms itself with agility.  A final stretch completes the vanity.  To my right a giant white heron lands, just as gracefully.  It extends until taut.  Now poised and elegant, with astonishing speed, it plunges into the water on the opposite side of where it was looking.  It certainly fooled me, and, no doubt the fish it pulled out of the river.  It walks the edge of the river bank for a while beguiling me with its unadorned beauty.  I find these moments in nature therapeutic.  I don’t just see them.  I experience them.

My childhood home had a garden once.  The gardener tended to the lawn and flowers while squatting.  I remember his once bright coloured turban, wrapped tight with a loose flap hanging over his shoulder.  He wore his simple clothing with an air of dignity.  He painted half bricks, dipping them in white wash and edged the flower-beds for symmetry.  He was proud of his handiwork.  But, fearing snakes, my mother had the lawn and gardens removed when my brother was a toddler.  They were replaced with a cement platform.  The gardener lost his job.  A few fruit trees provided some green to the starkness.  I can still remember the smell of the leaves of the custard apple tree as vividly as I remember the feel of cold, sanitized cement under my feet.

I was a child with imagination.  Fairies and goblins lived at the foot of the garden.  The mother fairies rested in hammocks of lace, while baby fairies smiled in their sleep nearby.  Fathers held on to dragonflies, releasing them when young ones with sparkle in their wings climbed aboard, grandmothers walked in measured steps, their wings fluttered in slow motion, while grandfathers snoozed, neatly folded in half.  After the cement was poured, the fairies left.  Years later Joni Mitchell sang, “they paved paradise …” about my front yard.

Having lost the garden, one of my favourite things to do was to climb the guava tree over the water tank.  Sometimes, I read my Enid Blyton books up there.  At other times, I lay stomach down on a sprawling branch, limbs hanging limp and pretended I was a leopard.  I watched the home help scrub with coconut husks and ash the brass water vessels that shone like gold from the effort.  The women gossiped and laughed with ease while precious water trickled to just under the rim.   They helped lift the vessels on each other’s heads and swayed home in careful steps, from the weight of it.  I climbed down the tree into teen years.  They were less joyous.

As a child I was an observer.  My eye perceived beauty in ordinary experiences.

Some things never change.  So, I remain …