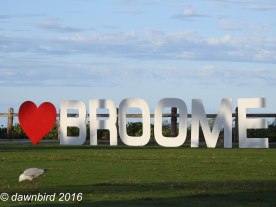 In a coastal town deep in the south west, the surf was pounding at my feet below while I enjoyed a leisurely breakfast of buttered toast and Vegemite.  A movement caught my eye and I glanced up.

She is seated near by, almost within arm’s reach.  The skin on her face moves like a concertina accordion in motion.  She is playing the music of smiles between strangers.  Hesitant, unsure.  We hold each other gaze a moment longer, and the moment sets her face aglow.  Her smile comes from a place where she keeps good memories.  Encouraged she says, with utter delight, “You’re a Vegemite kid!”  We both laugh at the incongruity of this observation.

We start talking and she tells me she is from Broome.  “I’ve just returned from there!” I respond, the comment invigorates a new friendship.  “I lived there from the war years until 1954”.  An only daughter among several sons, she lived free among the mangroves.  “Of course, there were snakes, but no crocodiles”, she tells me in a hushed voice of caution.  “There was only Chinatown.  Now …” her voice fades wistfully.

I tell her about Crab Creek where I watched birds live in harmony and the red earth bleed into the sea, my attempts at photographing the lesser sand plover at Cable Beach, the pindan cliffs of Roebuck Bay at dawn, the Shinju Matsuri Festival where art finds a home on shore.  Our smiles find a resting place here too.  Soon, her elderly husband helps her up on her crutches.  She limps to the door way, stops and turns around to look one last time.  Nostalgia is reflected in her eyes as blue as the sea she frolicked in, and as warm as the sun above it.  She is not looking at me, but at her beloved Broome.

Little did she know, so was I.