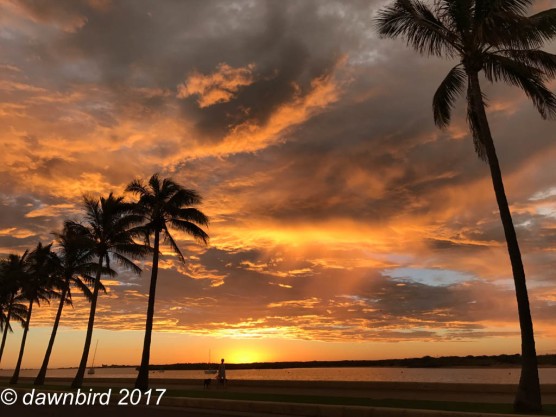 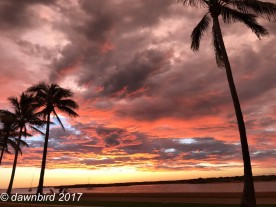 There’s a benevolent quality that comes to the fore in all when looking for ‘something special’ in Nature.

For some, a sunset is a sunset.  For others, it is an event.

Sitting at a waterfront pub at The Fascine with a colleague recently in Carnarvon, Western Australia, the visitors to town were obvious.  They eyed the soon-to-set sun and chose their table accordingly close to the heat of big glassed windows.  The locals buried themselves deep into the darkness of the indoors and away from the heat.  Others, cold beer in hand, sat on the ledge and directed the tourists where to find the best angle for their photograph, cautioning when an occasional car drove by.

I’ve always been drawn to the sky.

As a child in India I recall we would hire ‘summer beds’ for several months.  They would be lined up in the front yard with snowy white mosquito netting.  The maid would make up the beds just after dusk.  Slipping into a cool bed at night when the sun had gone down is a delicious sensory memory.  Chatting to our neighbourhood peers over the hedge and being constantly hushed to sleep is another memorable one.  We had no fear.  We were safe, in the open.  The monsoons would arrive, with rain showers predictably at midnight.  There would be a mad rush to take the bedding indoors to be set up hastily before we caught a few more hours sleep.  It was something that happened every night for several nights until the rains would appear almost constantly, day and night, before the summer beds were sent back, until next year.

I was always fascinated by the night sky.  By the stars.  By the moon.  It was my connection with the wider world.  It was the same Moon viewed by others around the world in faraway places.  It was a world I wanted to be part of.  Each summer night, I plotted and dreamed … one day …

My “one day” is here.  I still look at the sky with wonder.  How can I not?  There is one difference from my childhood.  This time, I want others to be part of my world.  So I share.