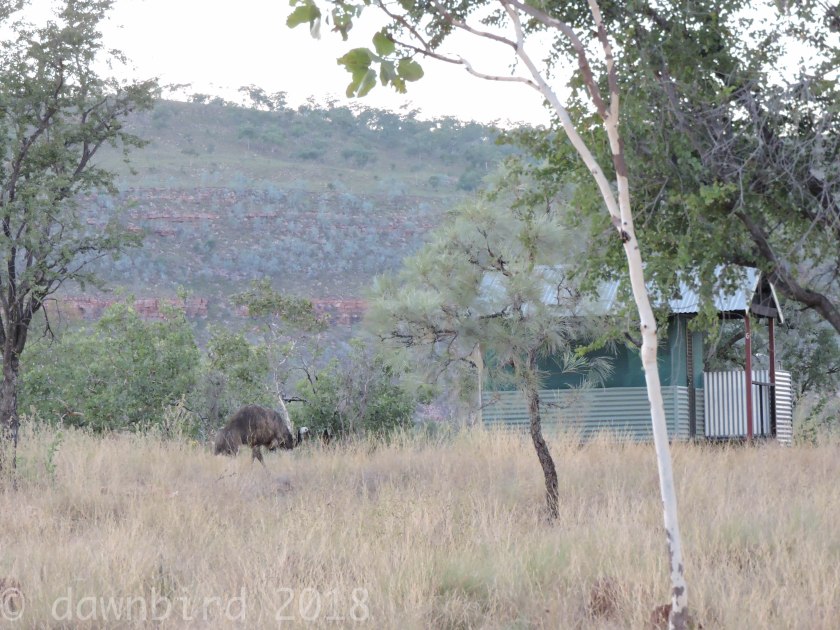 It is difficult to comprehend it is over a year since my holiday in the north to a remote outback cattle station in the East Kimberley region.  The thought of a very ‘rustic’ environment where crocodiles, lizards and snakes are prolific was easily overcome because I know the landscape.   It is awe inspiring.  I joined a group of writers.  All strangers.  I hadn’t written and shared my work face to face with an audience for over 17 years, following the loss of my writing buddy.  So I didn’t expect to write anything.  Why would I, I reasoned.  The anonymity of blogging was satisfying a deeper need in me.  But I looked forward to the experience of the East Kimberley.  And, I, who flinches at the sight of a tiny gecko, wanted to test my mettle in this harsh environment.

One night I lay in the ‘rustic’ cabin listening to the sounds of the outback.  Something in me came alive.  I allowed the previous days of writing with strangers, now intimate strangers, to flood my senses.  I wrote this after sleeping in a tent in a very remote area, on the banks of the King River, where the eyes of a crocodile glowed at dusk.  The brolgas called in the distance.  I knew they danced under the stars.  My heart heard their music.  The feeling of oneness with strangers in a stranger environment was complete for the city me.  I opened up.

As the moon brightened the night,

I walked along the celestial bitumen

I saw stars there, signposts for travellers lost.

I saw stars in other places too, that only I could see.

Have I been lost?  Did you leave them there for me?

As dawn unveiled the granite ridge

I saw a kapok tree, aglow, with yellow flowers on bare, brown branches

And at my door, emu and wallaby.

Child-like I spied on nature

clutching seedpods in my hand

And, while passing travellers warned,

I experienced life at a billabong.

I walked down a dusty path, visible to you, not me

and at my feet, I found stars twinkling

where light and shadow meet.

I have been on a silent journey

This time, the million steps became one,

when I headed out in someone else’s footsteps

and returned in mine.

My fellow travellers, you were not to know

But in the barren night, alone, not alone

I found something glowed in the Kimberley

It was the stars

The ones you left for me.