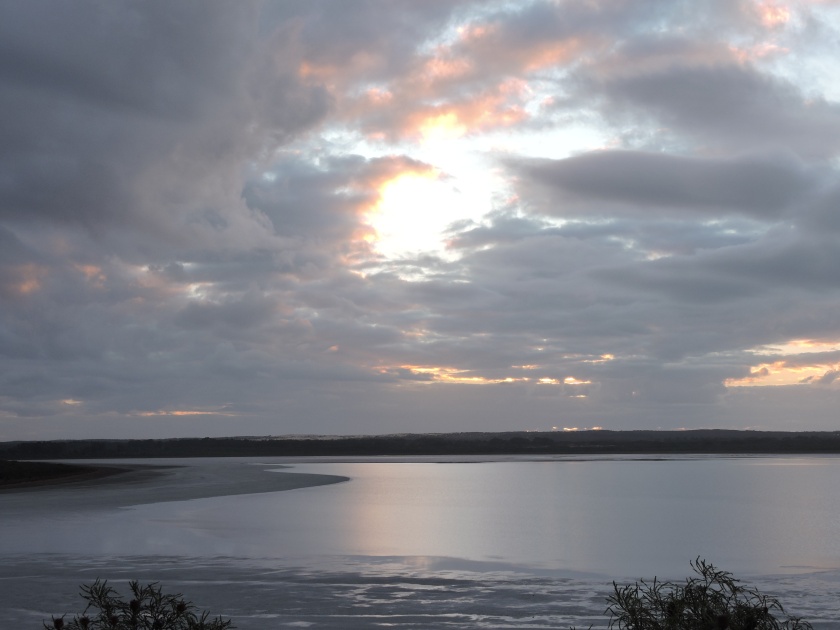 I was hotel bound for two days straight.  It was dark in the morning and dark when I returned after work with no time to go out with camera.  I was feeling tired and trapped, until today.

The flu season is in.  With cancelled appointments I finished on time today, did a quick trip to my hotel for the camera and headed to Pink Lake.  The lake is no longer pink but the grey of sunset was calming.  I needed this today for clarity about where I am and where I want to be.

I stood at the lookout and thought of my dear friend, LR.  An American author and activist who I loved dearly so many years ago.  I’m not sure if I’ve written about him previously but feel the need to have his presence with me right now, so I’ll write about him again.

I was an undergraduate, working through an essay late one night while my children slept.  My paperwork strewn around me as I lay on the carpet.  I came across an article and was captivated by the power of words.  I flipped back to the front page to look for his university address when I realised it was a home address.  I read and re-read the article several times and just knew I had to talk to him.  At 4 am Perth time I dialled international directory and they gave me his number.  I dialled it not knowing what time it was on the West Coast of USA.  The phone did not ring.  At all.  He said hello.  And I went silent.  I then stammered who I was and why I was calling him.  He was patient with me and let me talk.  In that hour we became friends, and remained so, until he passed away a few years ago.

My friend LR taught me about inclusivity.  About passion.  About acceptance.  About outrage.  About having a voice and how to use it.  About silence.  About nature.  About the “treasures” one finds in the depths of depression.  He introduced me to the works of Joseph Campbell, Elie Wiesel, Viktor Frankl, among many others.  And, he taught me how to feel ‘safe’ in a relationship.

In all those years of friendship we talked every week but I met him just once.  He was tall and had a flowing white beard.  (I’ve just realised, all the men in my life have had beards!).  To be in his presence was to be lit up from the inside.

I was at a conference in Washington DC and was invited to a party by a delegate.  I sat on a footstool at LR’s feet and we were talking.  When he stopped to take a breath I told him, he was the only man on earth who made me wish I was 30 years older.  Why? he asked me surprised.  I told him with absolute honesty, “because I would ask you to marry me”.  A confirmed  bachelor, his life committed to activism and community, it was the first proposal he had received as far back as he could remember.  We laughed at the reality of our circumstances.  His kind blue eyes sparkled at my candour.

I loved him dearly.  I always felt safe with him.  He encouraged me to use the opportunities I had been given to make a difference.  I am where I am today, because of his encouragement.

We all need friends like LR.  They may not be around us in their hordes.  We just need one, much like a stone cast to the middle of a pond, when they touch our life, the ripples are far reaching.

In response to Word of the Day Challenge : Safe